Crypto Investing #64 – What Is The Cryptocurrency Flippening?

This is the Bitcoin Dominance “index” we keep referring to in the above video:

Tai Zen: What’s up guys. This is Tai Zen. Today, I have the honorable grandmaster, legendary, world renown, LeonFu.com.

We’re driving past the new Atlanta Braves stadium right now. Leon and I were just talking about what’s known as the flippening. We want to explain to you what the flippening means and how you should respond to it as a cryptocurrency investor.

Let’s start off with the explanation of what the flippening is.

Tai Zen: Everything that’s in the cryptocurrency world.

Tai Zen: That number is the percentage of Bitcoin in that 25 billion.

Leon Fu: Historically, when I got into Bitcoin, that was over 90%. Bitcoin dominated that index over 90%. Then, it has been steadily dropping. It goes up and down, but it’s been pretty clear that it’s not able to create higher height.

That was a very popular statistic that coinmarketcap copied them. Then, coinmarketcap went one step further is that they graphed it. Now, you can visually see this dominance index change over time. It’s very volatile.

Tai Zen: But over the years, it has slowly declined

Many people believe that Bitcoin will no longer be the dominant cryptocurrency and that would imply that the Bitcoin dominance index falls below 50%. It is no longer the majority of the value of cryptocurrencies. At that point in time, I think there are 2 definitions. One is that the number falls below 50%. I think that is my interpretation for the flippening. If you got Twitter, the flippening is where Bitcoin is no longer dominant.

Tai Zen: …becomes a dominant and the price of cryptocurrencies are no longer priced in Bitcoin…

Leon Fu: Let’s say Ethereum goes to 500 and Bitcoin comes down. That will be when the Ethereum moves into first place. That is at least my interpretation of what the flippening could refer to.

Tai Zen: The first definition of flippening is when Bitcoin dominance falls below 50%. It makes up less than 50% of the entire world of cryptocurrencies.

The second definition of the flippening is when you’re saying that when Ethereum… We just say Ethereum right now simply because it’s the second biggest cryptocurrency. Anyways, at some point, Bitcoin is no longer going to become dominant.

Leon Fu: Bitcoin would no longer be dominant, which means they will not be number 1. It’s been number 1 since the beginning. No cryptocurrency has ever taken an over the number 1 spot.

Tai Zen: Now, there’s a potential that Ethereum can be the one that does it. Therefore, when it takes over it, that’s another definition of it.

Leon Fu: That’s already happening right now. Many cryptocurrencies on Poloniex are priced in the Ethers and USD.

Tai Zen: But Is that common yet? The other thing too is when all the cryptocurrencies are not being priced in others. What I mean by that is not all the ICOs are priced in Ethereum. When you look on there, they’ll show Bitcoins, USDor whatever it is.

The one that was running today match pool was priced in Ethereum only. There’s going to come a time when the ICO would just run predominantly…

Leon Fu: Well, if we get to that point, we are way past the flippening. The flippening is not an inflection point where things change and flip…

Leon Fu: Anyway, that’s the flippening for you.

Tai Zen: That’s the definition of the flippening. Let’s talk about what we do as an investor. Now, keep in mind guys that there’s going to be a really sad day for the Bitcoin maximalist including ourselves.

Leon Fu: It will be an end of an era. I’m not sure I would be sad, but it will be a historic day for us because it’ll be the first day of a new world. I think it’s a day we will both celebrate and mourn at the same time.

Tai Zen: It will be a joy and pain, sweet and sour.

Tai Zen: It’ll be a push and pull.

Leon Fu: If it comes, we will definitely both have a celebration and mourning.

Tai Zen: As an investor, we can’t let any of that deter us from making money in the markets. Whenever that day comes, we’ll have to be prepared to make adjustments as necessary. However, the Bitcoin maximalists, Tone Vays believes that when segregated witness gets implemented into Bitcoins, all the Altcoins will get crushed.

Leon Fu: I agree with him.

Tai Zen: I agree, but the altcoin not going to go away. There’s still bucket loads of money still to be made from altcoin

Leon Fu: That could be a trade waiting for that snapback. That is actually something I fear at the moment. It could be an opportunity that SegWit seems to be gaining momentum. On the day that it becomes official, I almost guarantee Tone Vays will get on Twitter and say: “I told you, son.”

Tai Zen: That’s his nickname, which is Tone I-told-you-so Vays. We should have listened to him when he said not to invest in the DAO.

Leon Fu But he also said not invest in everything except for Bitcoin.

Tai Zen: One thing I do like about what he says is that he doesn’t get emotional about it. He just presents what he believes is the fact. Therefore, it’s up to you to consider whether or not what he says is logical or not.

He doesn’t get emotional and gets crazy like Roger Ver does although he been toning down. Sometimes, in some of the videos, he gets so dramatic that you don’t know if you should listen to him or not.

On the other hand, when Tone Vays is presenting his argument, he’s presenting logically or at least he tries to present it in a logical manner so that people can understand it.

The thing is this. Whether Bitcoin is the dominant a cryptocurrency or not, what’s relevant is when you see opportunities in cryptocurrencies, you take advantage of those opportunities. There’s still money to be made. It doesn’t matter if the cryptocurrencies go down or the altcoin can crush. I believe that’s only going to be temporarily…

Leon Fu: so you can write it out.

Tai Zen: …so you can write it down. If you’re not sure what to do, then watch and one of our previous videos about the 4 things that you can do.

In case of the Bitcoin hard forks and all that happens, you just decide which one suits your risk tolerance levels and you can go from there.

The reason why we’re making this video is to explain to you what the flippening is. The second reason is to remind you that if you’re an investor and these things happen, there’s definitely going to be a lot of opportunities. Some of the altcoins that were too high might drop down low enough to where you can pick them up.

Tai Zen: Is there anything else you want to talk about?

Tai Zen: Thanks for watching this video. If you guys like this video, give us a thumbs up. If you don’t like it, us a thumbs down, so we’ll know and not make these videos anymore.

If you have any friends or family or coworkers or relatives that are interested in learning to invest in the cryptocurrencies, make sure that you share this video with them.

Be sure to also subscribe to our newsletter. It’s that cryptocurrency.market/newsletter. We’ll look forward to seeing you in a future video.

We believe you should NOT be in front of the computer all day making short term, in and out trades. That is no different than having a “day job” at home instead of at the office. After completing the blueprint, you will learn how to PUT your money to WORK for you in the crypto market.

If you want to GET RID of the anxiety, nervousness, self-doubt, and FEAR of picking the “wrong” cryptocurrency and losing your hard earned money… then don’t think twice about it; get the blueprint today because it’s the perfect fit for you. You will learn “The VC MAN Method™” that we developed that allows you to systematically identify “A” Tier cryptocurrencies worth investing in, that are not scams, by identifying the 5 Key Traits of a Profitable Cryptocurrency. If you have the burning desire to make Life Changing Profits™… Faster Than You Ever, if you are SICK & TIRED of struggling to figure things out alone or listening to people who don’t make a living from crypto investing… then this blueprint is a perfect fit for you. YES, there is a guarantee! If the Cryptocurrency Investing Blueprint™ did not deliver on what was promised on this website, simply make a request within 30 days for a refund, and we will cancel your student access and REFUND you back 100% of your purchase in US dollars.

Now there’s no excuse! If you’re serious about making Life Changing Profits™ in crypto investing, then click on the link below and order your copy of the Cryptocurrency Investing Blueprint™ immediately!

Get Your Copy of The Blueprint Now!
PrevPreviousBig Investment Theme #2 For 2017: Governance
NextWaves Platform For Investors #8 – One Year Anniversary UpdateNext 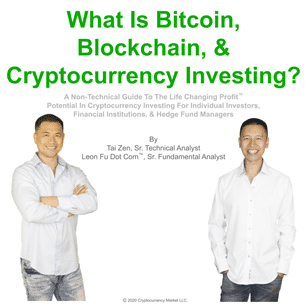