On December 27, 2017, the Honorable, Grandmaster, Legendary, World Renowned, Leon Fu Dot Com™ the Great Oracle of Crypto™ shared his analysis of the upcoming Bitcoin Private with our private mastermind/coaching group at 1:44am: 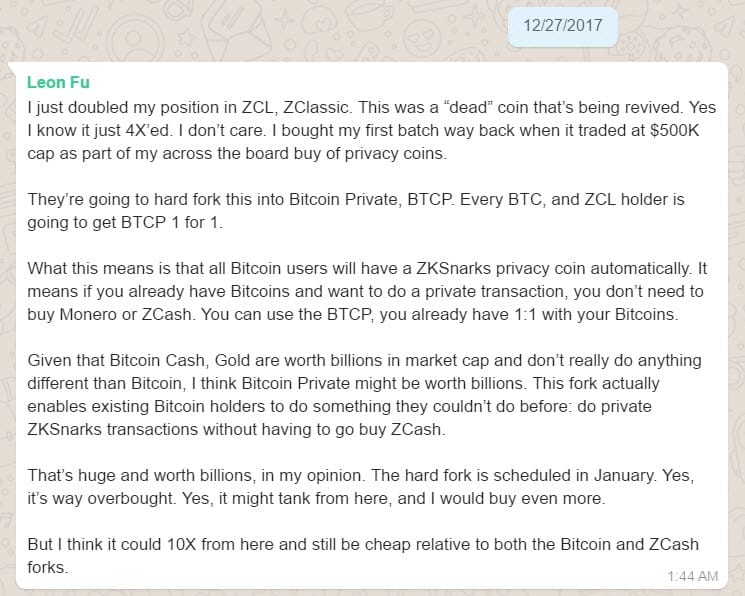 Here is price chart of ZClassic indicating when Leon Fu Dot Com™ did his analysis:

Since then, many people have asked us what happens to ZClassic after the Bitcoin Private fork?

1. A Quick History
Of ZClassic

ZClassic Is a fork of a another cryptocurrency (called ZCash) and it was originally created by a computer scientist from MIT name Rhett Creighton who lives in the city of Austin which is located in the state of Texas.

The reason that Rhett created ZClassic was because he did not like the idea that 20% of ZCash mining rewards were given to the private investors who help fund the ZCash project. You can learn more about the history of ZClassic in our interview with Rhett Creighton here:

Rhett started the ZClassic project but did not continue development on it because he had a full time job and was unable to continue working on ZClassic full time for free.  Later on, Rhett started a project called Whalecoin. I have no clue what Whalecoin is so I have no commentary about it.

2.   A Quick History
Of Bitcoin Private

In 2017, the political in-fighting within the Bitcoin community reached its peak and the community split into 2 major factions each with it’s own version of what they believe Bitcoin should be.

One community wants Bitcoin to be a “store of value” and wants to implement the segwit technology so they can later add a feature called Lightning Network to increase transaction speeds. I will call this version  “Bitcoin Core”.  This is the version of bitcoin that Leon Fu Dot Com™ started with back in 2012.

The other community wants Bitcoin to be an “electronic cash” so they prefer bigger blocks to increase the transaction speed. I will call this version as “Bitcoin Cash”.

I am not calling it Bitcoin Core to show support for Bitcoin Cash. I am just doing it for explanatory and ease of reference purposes so there is no confusion as to which version of Bitcoin I am referring to for new readers in the future.

When Bitcoin split into Bitcoin Core and Bitcoin Cash, Rhett admitted that he thought that Bitcoin Cash would die out and have no value but he was wrong. As a computer scientist Rhett found it interesting that Bitcoin Cash survived and continued to grow in value.

This observation prompted Rhett to want to initiate a new computer science experiment in which he attempted to fork ZClassic’s privacy technology into Bitcoin Core.

By forking ZClassic into Bitcoin Core, Rhett is adding the best known privacy technology on the market right now into Bitcoin Core. The new token would be called “Bitcoin Private” and the official symbol would be BTCP.

What this means is that all Bitcoin Core users will have a ZKSnarks privacy coin automatically. It means if you already have Bitcoins and want to do a private transaction, you don’t need to buy Monero or ZCash. You can use the BTCP, you already have 1:1 with your Bitcoin Cores.

When Rhett made his intentions public in December 2017, the price of ZClassic skyrocketed from the single digits to over roughly $240!

The price went up because in December 2017, the price of Bitcoin Core was way above $12,000 so it was much cheaper to get Bitcoin Private by buying the ZClassic tokens which cost less than $30 at the time.

3.  What Happens To ZClassic &
Bitcoin Private After The Fork?

Everyone is asking Leon Fu Dot Com™ and I what happens to ZClassic and Bitcoin Private after the fork?

We are NOT licensed financial advisors nor psychics and our opinions & commentary are for humor and entertainment purposes only!

Here is our thoughts & opinions about ZClassic & Bitcoin Private BEFORE & AFTER the fork:

b) After the snapshot & fork around February 28, 2018, we expect some folks will immediately sell their ZClassic while the price is still high. Many people will have this same thought so everyone will scramble to dump their ZClassic tokens before the price crashes. The advantage here is that if I sell my ZClassic tokens immediately after the fork, I can possibly capture the high prices and sell my tokens near the top n have the potential to capture maximum profits.

The disadvantage of selling immediately after the February 28, 2018 snapshot is that the Bitcoin Private network may NOT be stable yet and there is a slim chance I may NOT get any BTCP tokens because I moved my ZClassic tokens too early before the snapshot/fork process was completed and stable. The other downside is if I’m not very computer savvy, I may not be able to move my ZClassic tokens to the exchange fast enough and other traders may move their tokens there quicker than I do and sell their tokens before I do and crashed the price before I even get my zclassic tokens to the exchange.

c) Leon Fu Dot Com™ and I have the investment thesis that if something makes money in crypto, people will continue doing it until it stops making money. We believe Bitcoin Private will be a huge success and at least have more value then Bitcoin Gold because we believe the privacy aspect of Bitcoin Private has significantly more value to everyone versus a new mining algorithm provided by Bitcoin Gold.

Therefore, if I’m a blockchain software engineer and I just saw the success of Bitcoin Private, I would immediately fork ZClassic into the Bitcoin Cash community and repeat the process. Why not? If it makes money why stop?

Therefore the advantage if I hold on to the ZClassic tokens and not sell it immediately after the Bitcoin private Fork Is that I get to receive future airdrop tokens if someone decides to Fork zclassic into Bitcoin Cash or other versions of Bitcoin. Obviously, the disadvantage here is that if no one attempts to fork Bitcoin Cash or other versions of Bitcoin then I will regret not selling my ZClassic tokens while it was near an all-time high.

4.  Tax Considerations Of Selling
ZClassic After The Bitcoin Private Fork

In the past, many folks considered trading one cryptocurrency for another cryptocurrency under the IRS Section 1031 “Like for Like” exchange. This means it is “not” a taxable event.

However the new 2018 Trump Tax laws eliminated this like for like exchange by stating that rule only applies to tangible real estate property and not virtual products:

Each time I make a trade or investment in a cryptocurrency I always try to calculate my tax implications manually. Here are some tax examples I want to share with you.

Keep in mind that I am NOT a licensed CPA so my opinions and commentary are for humor and entertainment purposes only. All calculations are very rough estimates.

Here are the 2018 Taxable Income Brackets for me and my wife filing jointly:

Let’s look at two simplified tax scenarios in which I hypothetically bought 1 ZClassic token in December 2017 for $10 and near the February 28, 2018 snapshot/fork date, let’s just say ZClassic is at $200 for a tax discussion’s sake.

In my opinion, the 12% tax to the government is no different than enduring a 12% pullback in the markets.

Scenario B:
Estimated Tax Of High Income Earner For Selling ZClassic After The BTCP Fork

Since I held my ZClassic tokens for less than 1 year, my $190 profit is counted as short term capital gains and gets counted as ordinary income or “9 to 5 job” income so it gets taxed at an estimated total of 40.8%.

In my opinion, the 40.8% tax to the government is no different than enduring a 40.8% pullback in the markets!

Therefore, I can take profits and…

If you are not sure about how to calculate your crypto taxes, I highly recommend checking out the TaxToken.io software. It is NOT a token sale or ICO. Their software is free to use for the next 12 months I think while it is still in beta.

They have the best accounting/finance guys I have ever met in crypto and are really sharp. Members of their team attended James Madison University known for their high level financing/accounting programs.  Their CEO, Nathan Nichols was one of top accounting/finance students at the university and was offered a high salary to come work at KPMG and he turned it down to work on the crypto software instead.

I met the young guys starting this crypto tax software project at the Dallas Bitcoin Superconference and currently in negotiations with them at the time of this writing to buy equity in their company because I believe they are poised to become the Quickbooks and Intuit of blockchain taxes. Obviously, my goal is to own equity in their company so my views and opinions are completely biased and have an inherent conflict of interest to our viewers and followers. However, I would not be looking to invest in their company if I did not think their team had talent or believe in their software project.

I have considered selling my ZClassic after the fork, but it has been tough for several reasons:

a) I personally don’t like paying the potential 40.8% tax to the government. I prefer to hold my trade for over one year and just pay the 23.8% long term capital gains which includes the Obamacare tax.

b) I strongly believe someone will step up and fork ZClassic into Bitcoin Cash (or other versions of Bitcoin) after Bitcoin Private is done. Furthermore, when our team hosted the 1st Official Bitcoin Private Conference in Austin, TX here:

I was very surprised that nearly ⅓ of the room raised their hands when Rhett asked how many ZClassic miners were in the room. Even more surprisingly was most of the miners were not interested in contributing hashing power to the donation pool to help cover the cost of Bticoin Private development. When I asked why, most of the ZClassic miners stated they wanted to hold onto ZClassic tokens and not give it up since it forked into Zen Cash once and they made a lot of money and then it is forking a second time into Bitcoin Private and they made a bunch of money from that also.

Therefore, it seems like we’re not the only ones to think that ZClassic will fork again, the miners believe so also.

c) Finally, given that Bitcoin Cash and Bitcoin Gold are worth billions in market cap and don’t really do anything different than Bitcoin Core, I think Bitcoin Private might be worth billions.

This fork actually enables existing Bitcoin Core holders to do something they couldn’t do before:  do private ZKSnarks transactions without having to go buy ZCash.

That’s huge and worth billions, in our opinion.

If you like our style of crypto trading and investing and sincerely serious about learning how Leon Fu Dot Com™ and I became multi-million dollar crypto traders you can follow us on Twitter at @heytaizen and @leoncfu or you might want to consider attending our next 4 day Cryptocurrency Investing Bootcamp™ here: